The City District of Prague 7 is preparing a new U Vody Park on the northern embankment of the Vltava river, which will be built between the port of Holešovice and the Barikádníků bridge. The modification of this part of the waterfront is part of the activities within the so-called Trojan Basin Suburban Park.

In 2022, the City District of Prague 7 plans to prepare project documentation for the relevant permits and implementation. In May 2022, it organizes the international urban conference City and River 2022, which will include the transformation of the U Vody Park. The following day, it will be complemented by this year’s Trojan Basin Day, which will take place in close cooperation with the Prague 6 City District and the Trojan Basin Suburban Park Association. A rich program for children and the public will follow.

The project is focused on the revitalization of the U Vody Park brownfield in Prague’s Holešovice. The subject of the project is the transformation of the former transhipment yard formed by concrete objects, areas and ramps, which was a part of the Holešovice port into a nature park close to nature, which it will connect. In 2019, large paved areas were demolished and the future appearance of this green island in the compact development of the city is currently being sought. Its location predestines it to be not only a local park, but also a connection to the central part of the city further north for pedestrians, runners and cyclists. At the same time, however, this land is unique in the structure of the surrounding city and thus has a significant potential to strengthen neighborhood and community relations and ties. Part of the project is the selection of a contractor, which takes place in the form of a design competition, one of the key criteria considered are measures to combat climate change.

The project supports the long-term strategic approach of MČP7 in the fight against climate change and adaptation to this change at the local level and at the level of important ecosystem or landscape elements and units (basin).

The goal of the project is, among other things, to increase the resistance of the region and its surroundings against to the negative effects of climate change and to reduce the negative impact of this change on the population.

The project is implemented thanks to a grant from Norwegian funds:

2017 Discussion on the creation of a new park

2019 Demolition of a concrete transhipment yard

2022 Processing of project documentation for relevant permits and implementation

2022 – May 13, International Conference City and River

2024 Completion of the park and its grand opening

What was already achieved here

It started with a public walk in 2017, followed by the abolition of the towing car park at the eastern entrance, and in the autumn of 2019, it continued with a significant demolition of paved areas financed by the City Hall. m. Prague and placement of two sports grounds. Much energy was devoted to repeated cleaning around the pillars of the Barikádníků Bridge. Subsequently, it was decided that the dignified and attractive appearance of the park would be designed by the competition teams within the architectural competition.

During June 2020, data was collected in the form of questionnaires in order to get acquainted with the visitors of the park and to identify the potential that the area has in its current form and whether it is worth preserving or supporting it. You can find the results of the questionnaire survey here.

Prague 7 turned to its citizens again in connection with the name of the park. From May to August 2020, the public sent proposals as the park did not have an official name due to its long-term abandonment and relatively poor accessibility. The winner was the well-known name U Vody Park.

On September 16, 2020, the Prague 7 City District, in accordance with the rules of the Czech Chamber of Architects, announced an urban-landscape competition for the future shape of the new park. All information can be found on the competition website.

On September 17, 2020, the City District in cooperation with the Trojan Basin Suburban Park Association prepared a public meeting at the site of the newly emerging Troja Basin Day 2020. Visitors were offered an outdoor exhibition on upcoming projects in the Troja Basin, a guided walk and a participatory meeting to revitalize Císařský ostrov, an introduction of the new park and a rich accompanying program for children and adults.

On February 16, 2021, the Prague 7 City Council approved the results of an urban and landscape competition for the design of a new park. The author of the winning design is the YYYY studio. Also, from March 22 until April 9, 2021, the City Council exhibited all the competition proposals in the lobby of the City Hall. 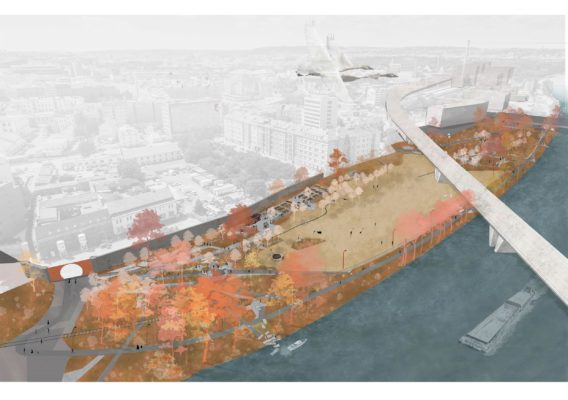 On Wednesday, August 11, 2021, a participatory public meeting with representatives of the City District and designers of the landscape studio YYYY took place from 5 pm on the site of the future U Vody Park. The participants got acquainted with the current phase of the project – updating the study, which follows on from the urban-landscape competition. Then it is time to prepare the project for a combined zoning and construction procedure.

The planned output of the submitted project is landscaping, adding furniture, supporting community use of the park, working with rainwater, improving access to water and improving permeability. The results of the project follow the resolution of the Prague 7 district, which declared a state of climate emergency. The resolution contains a commitment to implement measures that will help improve the climate situation and can inspire other parts of the city, towns and municipalities to jointly change their behavior and actions in relation to the environment. Specifically, it is, among other things, an effort to get more greenery into the streets of the City District and to maximize the planting of trees and other greenery in public space. The project also takes into account infiltration, retention and rainwater utilization. The related project addressing cycle paths has a positive effect on reducing the impact of transport on air pollution and dust, as well as supporting pedestrian transport, which the project activities include. All activities take place in close cooperation with the public administration and the inhabitants of the respective area.